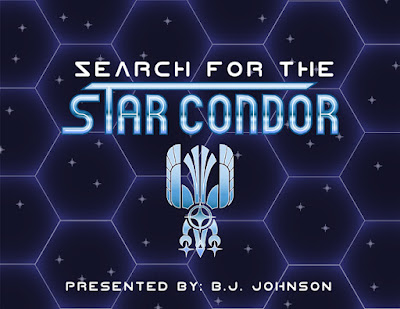 So my final game, both on my GM docket and of the con itself, was a three layered space fantasy confection that was a sequel to a game I ran at Helgacon VI called Voyage of the Star Condor. (The inestimable Delta did a good write up of it back in the day.)

This game, like its predecessor, was a mashup of three different sources:

The classic 1983 Parker Brothers board game Shadowlord! provided the board and the character concepts, and inspired the setting. It's an exemplar of that early VHS era brand of Star Wars fueled high fantasy with lazer swords, robots, and spaceships.

The original Voyage of the Star Condor was inspired by Delta's "Outdoor Spoliation" games, when I had the idea of using the galaxy board from Shadowlord! as the outdoor to spoliate, as it were.

Star Frontiers: Knight Hawks provided the game mechanics for the epic space battles. Gotta credit Delta once again for hipping me to how good this system is for easy to run starship vs. starship action.

And finally, Labyrinth Lord was my usual engine of choice for guy vs. guy or guy vs. monster battles.

Now I shall elaborate on the game in the style that Delta uses on his site to analyze his games. (This is really turning into the Delta show. What can I say, the man's good at what he does and a lot of what he does inspires me.)

1: Time and pacing. The game was divided into 3 phases. It started with a boardgame-like Exploration Phase where the Shadowlord! board and a custom made deck of cards was used to perform the eponymous Search for the Star Condor. I was really happy with the results I got from thegamecrafter.com, which were fairly inexpensive for such professionally produced looking items. I highly recommend using these guys for any extras you might need for your games. 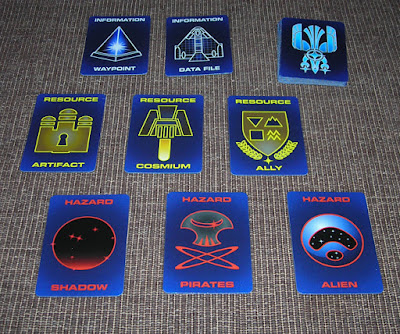 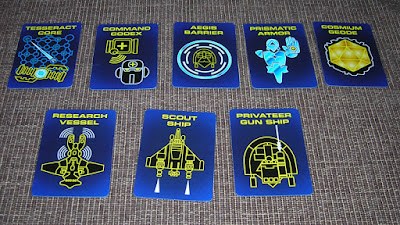 I performed some playtests on this part to make sure it wouldn't eat up too much time, and even though I wound up having to improvise with only 5 players instead of the anticipated 4 teams of 2, it fit in the exact hour I'd budgeted. (My three playtests averaged out to about 26 minutes or so, from which I figured 1 hour accounting for players learning the rules and general dithering.) 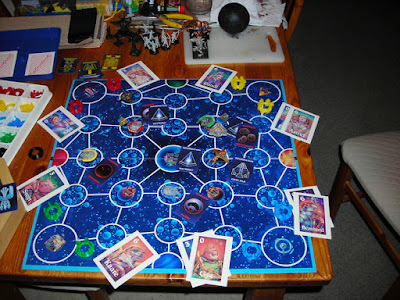 The second two phases were a dungeon crawl phase in the derelict ship when it was discovered, and a final space battle phase as the Shadows entered the star system to destroy their nemesis once and for all. Both of those sections took about an hour and a half each, so we wrapped up right on time.

I actually built a 4 hour playlist on my iPod to help me track the time organically, and at the end only had to skip about 3-5 minutes of music to get to the final triumphant lead out song. In the end the Shadows were defeated and everybody was happy!

2: The exploration phase balanced nicely despite being short handed. I ran it with 3 teams of 2, letting the Earth Lord sit it out. (This was party because of all the factions, Green lacked an adjacent star gate to their HQ. So using just Air, Fire, and Water leveled the playing field.) I was tempted to just throw in one of my extra ships and let everybody just pilot a craft by themselves, but the game was calibrated such that what mix of the 3 classes composed each team (Starrior, Wayfarer, and Astromage) had an effect on how they progressed thru the exploration phase. The way the teams worked out, we had each of the three possible combinations of classes crewing each ship.

3: The space battle phase went pretty well, despite a general unfamiliarity with the rules. We managed to have a pretty good session of Knight Hawks, even though I'm sure we were doing several things wrong.  (Here in particular is where I wished Delta, with his Knight Hawks expertise, was at the table. Move/fire order kinda confused us a lot. I think we got it to work well enough, all told.)

Since the good guys were playing with only 4 ships (and the Star Condor not being in prime condition), I only fielded 2 Shadow Corsairs and 3 Shadow Dreadnoughts, as well as the Invincible Darkness with its 6 hex Null Field that was impervious to missiles and lazers and would kill the power on any non-shadow ship that passed thru it. I think cutting down on enemy ships contributed nicely to keeping the pace up.

The placement of the asteroid fields was random, but wound up favoring the heroes. They managed to engage the Shadow fleet and line up their shots with the Infinite Spectrum Cannon (The legendary, ship killing super weapon. Think the Wave Motion Gun.) on the Invincible Darkness.

The first shot negated its Null Field, and then they took out the exo-deus entitiy (giant space mummy) that was revealed after some harrying fire from the Elemental Alliance ships. (I got the idea for the I.D.'s final form from the antagonist? of this trippy animated music video from the electronica group Birdy Nam Nam.)


4: Each phase influenced the next. Which was part of the plan, but some of it was improvised too. In addition to finding the 3 waypoints that pointed to the location of the Star Condor, the Exploration phase was meant for the players to accumulate artifacts and allies for the ensuing Ship Crawl and Space Battle phases.

They gained two NPC allies, found a suit of prismatic powered armor, and found a scout ship which they cast adrift after harvesting its Cosmium fuel. They also found data files that gave them the exterior and interior blueprints of the Star Condor and two of the three access codes needed to get into airlocks and control stations onboard.

There were several sections of the Condor infested with hostile aliens and astro zombies that were all that remained of the original crew. They didn't manage to clear them all, but sealed them off enough so that they wouldn't be a danger during the space battle. The only drawback was that the infestations in the port star drive and missile turret meant that the ship was down two uses of their missiles and rockets, and they lost a point of maneuverability.

5: I definitely winnowed out the chaff with this go 'round. Everybody was playing just 1 character, and the whole ridiculous "Task Force" mechanic from Voyage of the Star Condor got removed. (Long story short, it was a kind of composite henchman system based on units of 10 low level troopers. Really filled the screen with background characters.)

It was definitely lot easier to just keep track of one guy per player, rather than the multiple characters I handed out in the last outing. They did wind up with some henchmen in the form of the allies they recruited and the character I played to fill out the 3rd team in the Exploration phase.

I think I could re-do the original Voyage of the Star Condor and have it be a lot tighter and more focused while still retaining what was good about it.

What could have been better:

1: Some of the ship interior exploration challenges were underdeveloped or half baked. There were a few rooms where I didn't have a solid sense of how to solve the various problems and what would the consequences be if they failed to do so. Just one of those feedback/visualization issues that arises in play sometimes when you don't have everything mapped out as well as you need it. There was a bit of hand waving and a bit of winging it. A lot of quasi-open doors/find traps type rolls that needed better articulation.

2: I got into a few tense moments with the players as their frustration at the vagueness of some of these scenarios caused them to try to take leaps that I thought were out of bounds in game play, like narratively teleporting their characters from one point of the derelict ship to another. Nothing too big, just the seams and strings showing in my crazily patched together space opera.

3: The Shadowlord! map is gorgeous but I think if I were to develop this setting and scenario further I'd definitely re-do the map to give it more breadth and depth. When the players figured out they could pull double cards on spaces with ruins on them, they kinda clustered in the center and stayed away from the edges. Not really a problem but a more interesting map is definitely in order.

So anyway, that was the second outing of the Star Condor. All told, I think it went really well.

And then all of a sudden Helgacon XI was over and everybody was rushing around grabbing their luggage and saying their goodbyes 'til next year and striding out the door. It all goes so fast.

Only 11 months 'til Helgacon XII. It's coming fast and not fast enough. A paradox!

Fly on to infinity, Star Condor! Fly ON!
Posted by BigFella at 1:22 PM