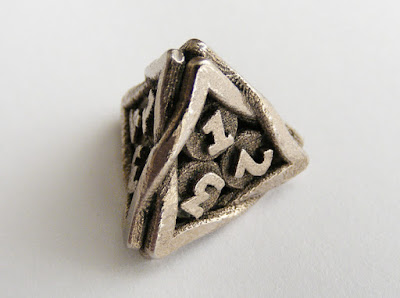 Well, it's been a couple weeks since I got back, so I probably ought to stop procrastinating about posting or this will be yet another undocumented Helgacon.

Among the cavalcade of wonderful gamers and friends who are part of the Helgaverse, there is a trio that I, in my infinite capacity for being a huge nerd, refer to as the Iron Triangle.

(I googled the term to make sure I wasn't making some kind of bad association, like calling us the swastika pals or something, and since all I found was deep politics wonk references to buddy buddy relationships between govt. agencies and special interest groups, I figured it's okay. Still nerdy, but okay.)

I am one of them, and the other two are my longtime gaming pals Paul and Delta. The artist, the magician, and the scholar. We have all been gaming together for almost twenty years. We're 3 of the original Helga's Heroes game group (and one of us was actually "Helga". No, I shan't elaborate on that.) We're 3/4ths. of the infamous MacGoohen Brothers from GenCon 2005. We have all attended every single Helgacon since its inception in 2008. We're all deep in the OSR, and run most of what you'd call old school or retro games at our annual gathering on the Cape. Both those guys influence my gaming immensely, and I hope they get the odd idea from me as well from time to time.

So this year all of the games I was in as a player were run by my fellow triangulars. I was immensely disappointed that Paul's scheduling algorithm didn't put either of them in any of the games I ran, but c'est la vie. (And that's absolutely not to say that I wasn't thrilled with the top notch players I got!) I'll get 'em at my table sooner or later. We've been gaming together for a long time and will continue to do so as long as we're able.

Anyway, Delta ran the Temple and Sewer sections of the classic tournament module "Slave Pits of the Undercity", and Paul ran "The Citadel of the Severed Hand" which was a 1 Page Dungeon Contest winner from 2013, to which he added the element of his newly minted Insanity Cards. All three sessions were a ton of fun and examples of DMs at the top of their game, so to speak. These guys are good.

Here are some of the high points:

The hall with the disguised assassins in the Temple wasn't a high point, but you sure got us Delta. You got us good. If only we'd listened to a certain party member (and I'm not being coy that it was me. I was one of the ones who shouted him down.) when he questioned the whole set up. Tournament play brings out a certain quarrelsome dynamic at the table sometimes. Ah well.

Using a Reincarnation scroll to bring back a dead party member in the Temple and having them come back as an angry hydra. That certainly put a spanner in the Slave Lords' works, I'd bet. It was worth the tournament points lost for permanently losing that character.

Vaulting the barricade of bad guys in the Temple and capturing their flame thrower wagon, even after taking a couple shots to the face from it. And then the subsequent rampage as we trundled it around setting stuff on fire. Alas, we ran out of napalm just as we got into it with the big bosses in the room full of snakes and assassins.

The increasingly wacky in character introductions at the start of the Citadel game. "I'm Frngrngrn Pantherclaw, and I'm obviously, unquestionably a human."

Assaulting the Citadel's gatehouse with a Phantasmal Force generated fog for cover. It wasn't a great plan, but it fell apart in our favor in the end.

Turtle the slow dwarf and his minder/cousin("My aunt said I had to bring him along.") taking down the Queen of the Citadel was pretty awesome. I wish I could recall the details more clearly. This is what happens when you procrastinate on your blog.

Pulling a Christopher Lee ("A man doesn't sound like that when you stab them in the back") on a couple of orc guards at the top of some stairs in the Sewer and then fireballing the rest of them from behind, then mopping up their ogre commanders was immensely satisfying. Delta is as even handed a DM as they come, but getting him to shake his fist at the players and lament his plans being foiled is one of the exquisite joys of gaming with the man.

The long, running effort to rescue the elf fighter/magic user from being swept away in the Sewer. Once again this wasn't necessarily a high point, but illustrative of the principle I've observed that running water features of any sort are like frikkin' Kryptonite to adventuring parties. Things tend to go epically pear shaped, I've found, when you take a bunch of heavily armored looters and drop 'em in the drink. Whole sessions, and whole parties, can be consumed by old man river. (Or stream, or drainpipe, or sewer, etc. etc. etc.)

Battling the bilious beetle beings running the eponymous Slave Pits at the end of the Sewer game was pretty exciting. It was a hard game overall, but I think in both cases we scored pretty high. I'll post the numbers here if somebody can email 'em to me.

I'm sure there are a lot of other moments I'm forgetting because too much time has passed. (Too much time passes in general between chances to game together.) Suffice to say, if you're at either of these fellows' table, you're in for a great game.

Thanks, Delta and Paul. I got a critical success when I rolled on the friend chart!

Labels: Helgacon, I endorse this product or service, session recount