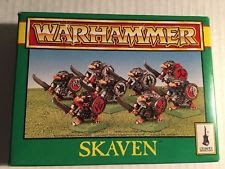 Waaay back in the day, back when I was a fledgeling DM just out of high school in the early 1990's and running games for friends in college, miniatures were kind of scarce, and I was kinda growing frustrated with the vagueness of "I attack the nearest one" when running combats in the dungeon. Most players could scrounge up a figure to represent their character, but massed mobs of monsters were a tough thing to conjure on the tabletop.

So to rectify this situation I purchased a box set with the idea of having them be general purpose dungeon goons. This was back when Games Workshop was just getting into plastics. Even back then goblins and orcs bored me to tears, so I decided to go with this old box set of GW skaven, since I liked their look and there were 10 of them which is a serviceable number for not a lot of money. (How times have changed. Games Workshop's products and "not a lot of money" don't tend to wind up in the same sentence these days. Bah.)

The way things were at most hobby shops, you just couldn't cheaply or easily get a large number of the same thing if you were buying blister packs of metal minis. (I think by now you've noticed that I've perennially been reluctant to spend a lot of money on minis. Well, to be clear, I mean not a lot of money PER mini. I still buy enough minis for it to be a minor material vice. Say what you will, buying toys makes me happy. My sweet spot right now is between $2-$4 dollars per dude, unless they're especially large or unusual.)

I wasn't quite the ultra-literalist mini-user I am now, so I figured they could do duty as anything from goblins to orcs to gnolls to whatever the encounter tables coughed up. As long as I had some consistent baddies to act as tactical tokens, I was satisfied. 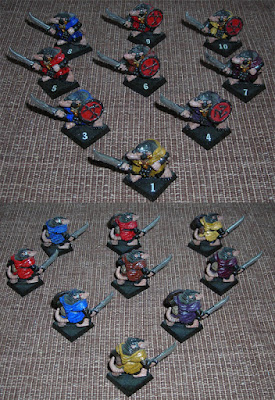 These guys are some of the oldest minis in my collection. Alas, poor #2 got cronched by a friend's parents' hyperactive Australian shepherd when my minis case was left open on the floor of their house in a moment of inattention. (His mom felt so bad about it she got me a gift certificate to a local restaurant as a weregeld, which was totally unnecessary but still greatly appreciated.)

I have a bunch of these old style Warhammer Quest skaven in my copious unpainted pile. I could do up a replacement for him. But I dunno. He'd stand out. My techniques have evolved a lot since I painted these guys. (I think they were actually painted with my art school acrylic paints out of tubes, rather than the bottled craft store paint I work with these days.)

Actually, the one thing about these guys that was truly irreplaceable were those rub down numbers. They're really hard to find these days. (At least for cheap. :-\) A lot of art supply and hobby stores just don't stock 'em in that size. I dearly wish I still had that sheet. It was lost in the endless shuffle of papers I've always been surrounded with long, long ago.

The numbers were my big solution to "I hit the nearest one." Now I could have my players tell me what number they were aiming for.

A lot later, I bought a box set of Rat Ogres and Giant Rats, when I was filling out my assortment of dungeon dangers. I blogged about it a while ago here. I was inspired by Monty Python's Spanish Inquisition when I painted up the Clan WhateverblahblahWHFluff handlers. Because if I'm anything at all, I'm a huge nerd.

And that's that about my rats.
Posted by BigFella at 8:52 AM