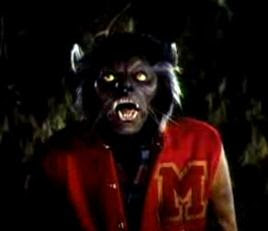 Casualties:
Rael the Thief has picked up a nasty case of Lycanthropy. I will point out at this time that it is unknown A: When it’s gonna strike (Don’t count on it just being during the full moon.),  B: what will cure it, and C: whether she can eventually gain control of it. Whatever the answers for those questions are, they will be entertaining. To me at least.

Yeah, y'see, when a character takes 50% damage from a lycanthrope, like the ones they fought in Session One and Session Three, isn't paying attention when the DM rolls a saving throw for them, and then goes several weeks without even once saying "Should I be worried about contracting lycanthropy?", well...

That's pretty much when you should worry about contracting lycanthropy.

And thus our party's thief got to start hyphenating her class with "werewolf", which is like Halloween in July for a DM running a schlock horror themed game, let me tell you.

She took it in pretty good stride, all told. The party had been looting the assorted above ground crypts in the Ghoulardia Pass graveyard and using the hunting lodge as a base of operations. After a particularly good haul from a wight haunted crypt where they turned up the Skullsword, as they dubbed it, 'cos it had skulls on it, Rael had her first wolf-out while they were kicking back and resting. They managed to non-fatally pacify her, so now the party has gained its first self motivated long term goal of either curing or controlling her carnivorous condition.

I was so happy when our therianthropic thief said she was looking to figure out how to weaponize her wolfiness rather than just getting rid of it like a boring old borewolf. Those are the sorts of plot hooks that make it so much fun for a DM.

Much fun was indeed to be had from this decision, as you shall see, my gentle readers. Stay tuned to see how it all unfurls...
Posted by BigFella at 12:28 PM