Paintin’ the town in Strangeldorf. 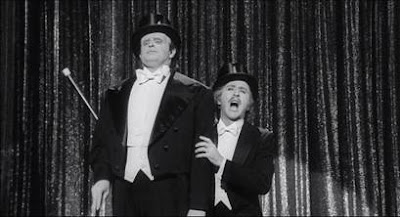 All items were liquidated for a fair price, and the characters each wound up with 437 gp apiece to spend in town. Purchases were made, scythes were sold for scrap. A tuxedo was commissioned for Ritzy for 25gp, to go with the fancy heavy flail bestowed by Greed.

I hereby declare that gussying up in a fine suit bestows a +2 bonus to charisma checks, until such time as you wear it adventuring out in the field (either wilderness or dungeon) at which time it gets too mussed to give you that high pro glow. Fancy clothes bestow a +1 per 10 bux spent.

Rael and Arongoth tied one on with the Carousing Rules, each spending 400 gp and each earning 400 exp apiece.

Arongoth wound up 30 gp in dutch to the nefarious Fingertakers (the local criminal element) which Vlad covered. Unfortunately, he failed his carousing check and was caught pissing on the animatronic figures of the giant cuckoo clock on the town hall, and wound up having to choose either getting fined for 100 gp or 2 days in the gibbet. He spent 2 days hanging over the town square with only whatever eggs or rotten vegetables were thrown his direction to eat. 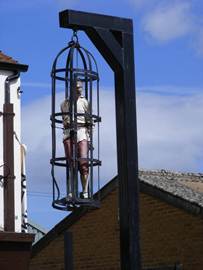 Rael managed to hold her liquor admirably, although she was growling and barking a lot toward the end of the evening. She wound up 21 gp short, slit a purse for 7 of that (with her teeth, even), and took a loan out from Vlad for the remaining 14. So she’s a bit hung over but otherwise good to go (as opposed to hung over the town square like Arongoth) 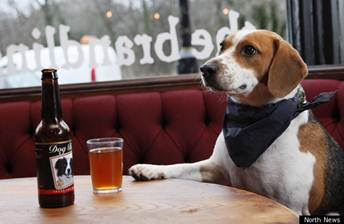 Not much more to say about this session beyond what was said in the original email. Vlad and the Homanculi decided to keep a lower profile, being a bit more torch and pitchfork averse than the human and mostly human characters, in addition to Vlad being a big scaredy cat. Luckily for Rael and Arongoth, he wasn't afraid to spot them a loan to keep them from getting their fingers taken. At this point all the characters are gaining texture and are fun to run thru whatever wringers I can come up with. The fact that Rael was a champion bar-crawler and true to her profession picked pockets for booze money, not to mention the whole werewolf thing, made her a real star of the show.

Having had their fun and fortified, our addled adventurers made ready to assault Cardille Keep and take down the vampire Lobovich. Stay tuned for shenanigans as we creep our way forward...
Posted by BigFella at 8:25 AM