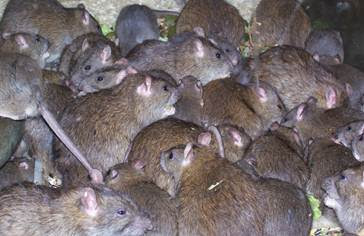 We’ll begin again next week. Thanks for a great session. Have a wonderful holiday!

Moving past the rat creatures nest the party found their way up a set of stairs to the hidden lab of Doctor Von Rattschmid, a mad scientist who was something of a renowned re-purposer of rodents.

They found him hard at work on some mousey monstrosity, assisted by his hulking hench-rat Fritz and his low slung lackey Nunkie, while one of his off the rack rat creatures ran in a large wheel connected to an apparatus that generated electric shocks.
The Doctor was of course rather upset about this intrusion on his privacy, as well as the suborning of some of his creations by Arongoth's zombification. I seem to recall there was a bit of negotiation before it came to blows, with the final deal breaker being Von Rattschmid's demand for the return of his property. Like most morally questionable dungeon delving crews, the party generally operated on the "finders keepers" rule.

Unfortunately for the party, the good(?) Doctor had the forethought to install some sort of override protocol in the rat creatures that still worked even after they'd been sent to the big cheese tray in the sky, so he turned our heroes(?) shambling zombified hench force against them.

I believe Fritz got killed by the party, then the Doc cast Animate Dead on him and sent him back into action only to get cut down a second time. Nunkie might have gone after the spellcasters and might have been the one who hamstringed Arongoth, but I'm not entirely certain. He didn't have a lot of HP and a smackdown from Richard Darkmagic's staff was enough to end his vile little existence.

They finally took the mad scientist down, but wound up with nothing to deliver to the coroner (or the crows) after Von Rattschmid's headless corpse collapsed and splattered into a swarm of scattering rats that had soon dispersed through all of the underground room's cracks, crevices, and mouse holes and disappeared.

Once the Doctor was out of the picture, they proceeded to loot his lab and the small private room adjoining it, netting a decent amount of coinage from Von Rattschmid's slush fund, some potions from the lab's medicine chest, a bunch of magical documentation, and four bottles of quality booze.

This was the final session before Thanksgiving 2013, hence the holiday well wishes. Not bad progress for a month's worth of sporadic hour long sessions. However they were pretty close to exploring the entire catacomb complex. I'd have to brew up some new in the very near future. Stay tuned to see just what I concocted...