This was the first session of 2014, and the party returned to find they had a bit of unfinished business. Lobovich, the vampire of Cardille Keep, was fixin' to regenerate and their crazy druid herb supplier was only willing to cough up half the promised werewolf cure ingredients for a half finished job, so back into the dungeons of the keep they went. There they found the zombies, who'd been milling around the same bank of cells where they'd found and rescued the curvaceous Stella, had been let loose as well.

The shambling corpses were easily dispatched, but the biggest problem they faced was that Lobovich was stuck in mist form, having been thoroughly discombobulated by their last onslaught. So they couldn't do the usual staking and baking that was the traditional way to finish off a vampire. They also couldn't drag his coffin into the sunlight, because it was several tons of solid stone and attached to the dungeon floor.

So they were presented with a bit of a tactical poser. Their only other option was submerging the vampire in running water, and that wasn't a workable option either. (Although Greed's player, who by then was becoming aware of a homanculus' inherent potential for body modification and customization, made the priceless suggestion that perhaps his character's bladder could be somehow rigged to simulate running water. Hmmm. Yeah, points for lateral thinking, but probably not totally feasible. At least in this context.)

Tune in next week to see the solution that our merry monster mashers came up with...

(To this day the modified bladder plan still cracks me up.) 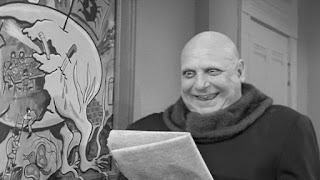