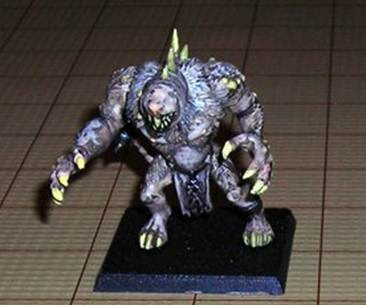 Monster’s Mashed:
1 Giant Rat Monster – peppered with magic missiles, slashed, shot with a crossbow, then had its head split open with a bastard sword. Subsequently zombified by Arongoth.
250 EXP

In this session we'd convinced another co-worker to join us, and he rolled up a Magic User. He didn't stay with us too long, as his job responsibilities eventually dragged him away. We kept his character as a henchman for a few sessions. I can't say much about Richard Darkmagic beyond a bit of foreshadowing that his eventual death was one of the most spectacular character demises I've ever seen. All I'll say about that, for now, is Ecchhh...

Game wise the party has delved back into the catacombs that extend under the graveyard. The entire south and west of which were infested with these horrible, humanoid rat creatures. (What can I say, I somehow have a lot of Warhammer Skaven minis. More on this soon.)

This particularly massive and monstrous specimen was kept in a large cave that could either be accessed from under one of the crypts, or via tunnels from the west, where you'd encounter its "keeper" stationed next to a fortified iron door. (This was the rat creature they'd encountered in the first session, with the gold earring and the baldric hung with coins. Hazard pay from their as yet unmet master for dealing with the big critter.)

There was a funnel through which slaughterhouse leftovers could be poured, and a water barrel with a pipe leading inside, a la the water bottles on normal rat cages. (If you read some of the earlier Creepy Crawl reports, you see this is a good way to dispatch the beast thru poison and guile. The keeper kept a jug of extra strength sleeping potion handy.)

I think the party simply busted down the iron door and mobbed the big brute, based on the rodent rending rumpus I'm seeing in the report. Then they zombified him and had another lumbering, chisel toothed meat muppet shambling ahead of them.

The bigger they are the harder they fall, I guess. He didn't last very long in the party's service either, as you'll soon see. Tune in on Wednesday to see how it went down.
Posted by BigFella at 7:54 AM