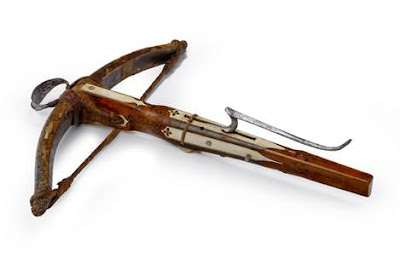 (BTW. Never google search “Scumbag with a crossbow.” It will make you sad. Honestly. (Long story short: pets with arrows in them. Some people need kicked in the nuts more frequently.) )

Equipment retrieved from Wilkins’ corpse:
1 Heavy Crossbow with  2 bolts (1d8 dmg)
1 Dagger
1 Pack of marked cards with saucy pictures for the jokers. (A rather specific, mildly disturbing definition of “saucy”) 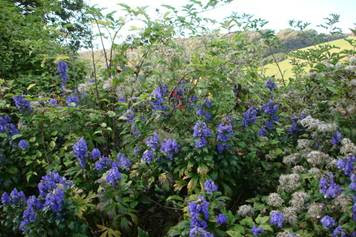 Here’s your shopping list for herbs:
Mountainroot Morel – A greyish morel that grows deep in damp mountain caves at depth of at least 50 ft down from surface.
Crimson Tail – Extravagantly poisonous weed with bright red, goldenrod like tufts. Handle with extreme care.
Madman’s Rose – Small purplish flowers with yellow spirals on the petals. Juice is hallucinogenic if touched or ingested fresh.
Golden Ear Mushroom – Relatively benign wood ear type mushroom that grows on fallen logs.
Greenishghul – Sickly looking whitish green shrub. Local lore says it seems to attract the undead to the places it grows.
Hermit’s Quill – White tufted plant with sharp thorns. Plant’s juices are a deep, blackish purple that stains anything and everything permanently.
Wolfsbane – A purple flower that can cause paralysis and potentially death if picked carelessly.

Reputed Lycanthropy Cure Recipe:
Place ingredients in a spotless copper kettle along with 1 gallon of dire wolf blood, 1 gallon of fine wine, and 1 gallon of holy water. Bring to boil, then simmer until its reduced to 1 pint of thick, black liquid. Strain and place contents in glass beaker and suspend in sun for 7 days. Cast “Bless” on the liquid, swallow a silver piece, then drink complete contents whilst holding breath. May the heavens have mercy upon you.

The party got into a dustup in the graveyard with Morgus' mob of minions, who got the worst of the encounter and fled the field down one scurvy crossbow wielding thug named Wilkins. (I went looking for an image of a skeezy, preferably medieval lookin' guy with a crossbow to head up the post-game email, but to my genuine horror found nothing but pictures of animal cruelty when I entered a search term I thought would get me the desired result. Lesson learned: google carefully.)

Morgus himself was not present, because I learned long ago whilst running some superhero themed campaigns that if a villain presents himself to a party of characters, they will move mountains to get at him and will never let up in their pursuit until their foe is an antagonist shaped scorch mark on the ground. So I figured the remote approach would be preferable if I wanted to try having some running villains in this. In the end it didn't save him, as you shall see much, much later...

Aside from some minor scuffling and the rifling of pockets, the party's spellcasters did some research in the late Doctor Von Rattschmid's modest arcane library to see if they could come up with a cure for Rael the thief's monstrous malamute morphing malady. I found some kinda random fantasy herb generator online and made up the wurwilf cure as I composed the email.

And so with shopping list in hand, the party drew their plans...
Posted by BigFella at 10:54 AM