Helgacon XI - The Resplendent Palace of the Sultan

I've been running an Arabian Nights themed campaign called The Thousand Year Sandglass for several years now, such that they've become a regular feature at Helgacon since Helgacon III. This year I decided that it's time to put the Sandglass on the shelf for a while, so I figured I'd give it a proper finale.

Last year's game "The Black Heart of the Burning Lich" featured a siege of the party's base of operations, the grand capital city of Kalabad, by the eponymous Burning Lich, a fiery undead sorcerer king from ancient times that they'd unleashed from his captivity in a bronze sarcophagus held by an evil sha'ir two years prior in "The Tower of Amashazzar". Long story (and neglected blog posts of yesteryear) short, they took him down and saved the town.

So I figured it was time for a celebration.

Hence the setting, the opulent palace of the Sultan of Kalabad. I posted the game's title on Paul's Helgacon Game listing and a brief flowery description, then had to sit down and figure out what I could do with that. Had to cash that check that I wrote with my big mouth.

I started with an elaborate map of the palace. This was the highest seat of power in a wondrous, mythical middle eastern empire, so it had to be at once fancy and fantastical. Here is the main level. I used it as sort of a game board, with player minis noting where they would wind up each night. I had a random roll for where the Sultan and the Sultana might end up as well, which could double the rewards or penalties if the characters' antics took place while they were there. 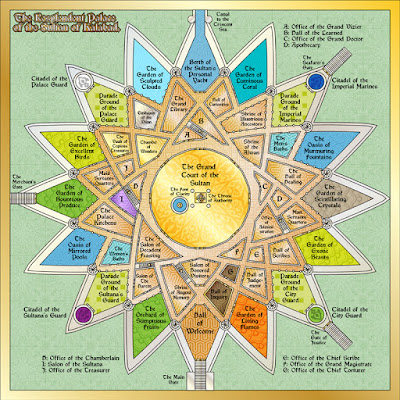 If you want to see more, watch this space for when I eventually get a campaign book together and up on one of the .pdf/print on demand sites. (I'm putting a pin in that idea here so that I can generate the gumption to actually do it. I gotta do it now that I've said I would. That's how the cowboys do.)

Next, I decided that since the theme of the game was a grand party at the palace, that its focus would be on Carousing. Taking the example of Jeff Reints' mighty and mischievous Carousing Rules, I made up my own custom tables for both failures and successes.

As an example, here's the top level mishaps table, for when the players failed their poison saves to see if their characters could handle all the exotic liquors and other heady amusements they were plied with. Each entry here had a series of elaborate sub tables for dicing out how each mishap would go down.

The Resplendent Palace of the Sultan Carousing Mishaps (d20)

Now, I've noticed in the past when playing and/or running games with the Carousing Rules in play that players will sometimes have a tendency to turtle up and avoid rolling on them. The risks tend to scare the naturally cautious side folks have more than the potential rewards (and potential for hilarious roleplay opportunities) entice them.

To ameliorate this, I came up with a mechanic I called "The Sultan's Favor".

I got a bag of plastic gemstones as tokens. Players started with three each, and could spend them to get out of trouble, or earn them when they did something impressive. At the end, they could cash them in for tangible rewards like commissions in the guard or fiefdoms or even wishes granted by the jinni negotiated by the royal family. The colors of the gems had significance, both in what might be demanded in certain situations and what rewards they could bring.

Of course, all of this is kinda high concept for a D&D game, so I hedged my bets and put several unknown dungeon levels under the palace, in case all the carousing shenanigans didn't gel as a worthwhile experience. I spent a lot of time spinning the wheels of doubt about this thing. I planted a lot of ins to the underpalace throughout the carousing section, and made a handout of a mysterious tablet that contained maps of the palace both above and below that I handed to the players almost immediately. 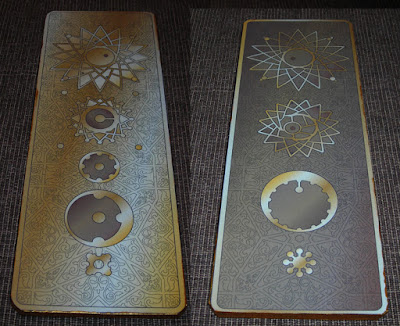 (Partly this was also to account for the complexity and non-angularity of the palace map itself. I figured it was better to just hand the map to the players than drive both myself and a mapper mad trying to accurately depict the interlocking mandala of the Sultan's palace on a sheet of graph paper.)

How it went down:

So seven worthies and saviors of Kalabad dressed in their finest finery and hied themselves to the palace. For three days and nights, they partook of the delights of the Sultan's hospitality. Spies, thieves, and assassination plots were uncovered. A tiger was released from the Garden of Exotic Beasts, but quickly pacified thanks to a Ring of Animal Control. A shark was evaded in the Garden of Luminous Coral. The Sultan's private yacht was sunk in its berth. (Those Imperial Marines really know how to party.) A wizard was cursed with inverted gravity, forcing him to walk on the ceilings and avoid areas of the palace that were open to the sky. The party discovered a secret door in the Grand Library that led down to a hidden underground cache of ancient and magical tomes, scrolls, and tablets.

From there they explored the upside down palace beneath the Sultan's premises. They fled from a swarm of undead, flesh eating beetles. They discovered a throne room guarded by an avatar of Sekmet, lion headed goddess of war. They discovered a roiling cistern supplying water to the palace above, fed by a spinning, careening Decanter of Endless Water set on "geyser". They climbed down the inverted towers hanging in a vast underground dome, the field of sand at its lowest peak littered with fallen architecture and toppled statues. All of these wonders they reported to the Sultan and his Vizier, and were well rewarded and regarded for their discoveries.

Bottom line, I think I had a lot of good stuff and fun ideas here, but it was all too much. If I don't watch myself, I have a tendency to overstuff a convention game, preparing a campaign's worth of material for a four hour session. I'd intended the carousing/consequences of said carousing segment to last for 7 nights, but we broke it off at 3 goes 'round the table by mutual agreement between the GM and players as it was all getting too complex for any of us to manage. (One of my players said they could almost see smoke coming out of my ears as I furiously tried to roll up and adjudicate each intricate situation.)

I think if I were to do this again, I'd cut out the results on the mishaps table that required a who/what/when/and where along with needing evidence to be gathered (For which I used a version of my Dodecahedrons of Detective Work.) and just have results be immediate, like the ones where a character is magically transformed or inducted into a secret society or something. Too many wheels within wheels within wheels here to work out for such a short term game.

I think I also made a mistake in making the carousing mandatory. It would have been better, as Miz. K suggested, that it be a discretionary/wagering mechanic with the Sultan's favor, closer to how the original rules were intended.

So anyway, it was fun enough, and I think despite the furious flailing about my players enjoyed themselves, but could have been better. I think the stuff I developed will fit nicely in a Thousand Year Sandglass book, so watch for that. I will make myself make it happen.

And thus, we bid farewell, for now, to the desert lands of Sanduk Ramul, the Empire of the East with its glittering capitol of Kalabad on the coast of the Crescent Sea.